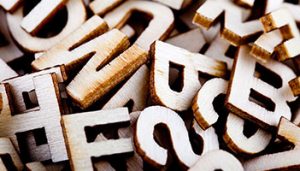 Do you hate to write? You’re definitely not alone. Many people do. And while it’s hard to name all the reasons people dread writing, there is one common cause: Fear of making a mistake. Of committing some mortal grammar sin that will make you (or me) look as dumb as a sack of potatoes.

We might have good reason to worry. According to the National Commission on Writing, bad writing costs American companies as much as $3.1 billion a year. That’s what we’re spending for on-the-job remedial writing training.

I can’t save anyone’s writing with just one blog post. But I can show you the most common writing mistakes I see. And please — don’t be embarrassed if you learn something from this list. There are a couple of items here that I’m still trying to get write rite right.

It’s such a simple thing to fix. And yet it still sneaks into far too many communications I see. No medium seems to be untouched — social media, emails, blog posts, even an occasional eBook will sport the dreaded “alot.”

Here’s a way to remember:

It’s AOK to use a lot of words when you’re spelling “a lot”.

2. Punctuation in and around quotation marks.

My editor here, Sherry Lamoreaux, pointed this out to me recently. She sent me an email about how she had been “drifting into inconsistency” over the placement of punctuation in and around quotes, and wanted to tighten up her usage. Ostensibly, she was sharing information, but I’ve been paranoid about making this (these?) mistakes ever since. (Editor’s note from Sherry: Me too.)

So here are the general rules:

He said, “You can’t have that dessert tonight” — and then he brought out the pie dish.

Periods and commas always go inside the punctuation marks.

She said, “You can’t be serious.” (Note: Do capitalize the first word in a complete quotation, no matter where it comes in the sentence.)

The Grammar Girl website advises this memory trick: “Inside the US, inside the quotation marks,” — and then gives these examples:

“Don’t underestimate me,” she said with a disarmingly friendly smile.

I can never remember how to spell “bureaucracy.”

Question marks and exclamation points vary, depending on the sentence.

If you’re using the quotes to indicate someone talking (or to quote them, of course), the terminal punctuation goes inside, as the quotation marks are indicating that everything inside them is a quotation.

Laura asked, “Who is that banging on the door?”

On the other hand, if the terminal punctuation is not part of the quotation — if it applies to the whole sentence — it goes outside the final quotation mark. Here, in this example from the American Psychological Association, the question mark applies to the sentence, not to the quoted material:

How will this study impact participants who stated at the outset, “I never remember my dreams”?

Practitioners of UK English put the quote marks inside the period or comma, and they use a single quote mark instead of the American double. (More on the UK/US differences.)

‘You Yanks punctuate your quotations strangely’, she said.

The editor goes down a rabbit hole: According to the Chicago Manual of Style (15th edition, section 7.62), when you are writing about a word or words, such as how we discuss “alot” and “a lot” in our first section, it is preferred to italicize the word (like so: a lot), but it’s okay to use quotation marks instead. When you do, the punctuation should match the rest of your text; that is, commas and periods should be inside the quotation marks, and so on. You may have noticed that we did not do that. It’s deliberate. We think that putting the quotation marks inside the punctuation emphasizes that we are discussing the word.Yes, technically it’s wrong, but we think it adds clarity. What do you think?

It hurts to read long paragraphs on mobile devices, especially phones. Know why? Because even those relatively “short” paragraphs in your Word doc become two or three times longer when you read them on a phone.

I see too many pages like this on my iPhone:

The source of this article will be withheld so as avoid embarrassing the offender.

The solution? Keep paragraphs to five lines or less.

4. Writing above a 10th-grade reading level.

Even smart, highly educated people prefer plain, easy to understand copy. This doesn’t mean we are lazy. We are all definitely very busy and very distracted, and no one wants to read copy that makes you aware that it takes effort to read it.

Alas, just telling you to write at an 8th-grade level or below might not be terribly helpful.

Here’s the gist of what that requires: Don’t make your sentences work so hard. Think of them like bridges. You don’t want to pile on too many phrases and digressions onto that simple little bridge. If you do, you’ll break it.

So take some of the weight off of it. Don’t make it work harder than it’s supposed to. Make it flow, make it easy to swallow and easy to digest. There’s no charge for extra sentences. So the next time you find one that’s gone on for more than one line, look for a way to break it in two.

I mentioned this to a fourth-grade teacher awhile back. She flew into a fury immediately, exclaiming, “There is an apostrophe crisis in this country!”

Hopefully, apostrophes aren’t enough to really rile you up, but they are sad to see, and they are everywhere. (And I think she’s right, by the way: We do have an apostrophe crisis.)

Confusing “it’s” with “its” is common enough online. “It’s” is the shortened version of “it is”. “Its” is possessive.

The zebra picked up its stripes, saying, “It’s no problem. Happens all the time.”

I know … most of the time, with most words, you add an apostrophe + s to make a noun possessive: “the dog’s breakfast”. But contractions have precedence over possessives, it seems.

The problem is so pervasive it even shows up on signs:

This is a finer point, but once you know to look for it, you’ll see it everywhere. A lot of us mix up tenses in our sentences. We might open the sentence in past tense with “She thought” and then almost unconsciously close the sentence in present tense.

She thought about how the smell of rhubarb pie had wafted through the apartment as she hangs up her coat in the closet.

Proper grammar or no, you can really do anything that works for the reader. (Especially in fiction. See James Joyce, et al.) But usually, mixing tenses doesn’t. It leaves something that feels like a hanging note for the reader — something’s amiss, but most of them don’t know what. So they just furrow their brows and keep slogging on through our words.

What’s lost is clarity. When are we? Now? Or then?

It goes without saying that misspelled words can hurt your credibility. But did you know that one typo on your website can cut conversions by half?

It’s true. At least according to British Internet marketer Charles Duncombe. He says he’s seen website revenues drop by half from just one typo.

Why the drop-off? Trust. If a website is unknown to the user or already looks a bit shady, one typo can make people think it’s a scam. And there are a lot of people online who are downright paranoid about getting ripped off.

This one’s for me. Or should it be I? Nope, definitely me. Unless I was saying, this one’s for you and I … right?

I still get this one wrong all the time. And I had assumed I was going to get it wrong for the rest of my life, until I found this genius graphic in a recent Shutterstock blog post:

If there are any freelance editors out there reading this, may I suggest this as the perfect tagline for your business?

The helpful site eLearnEnglishLanguage.com is full of well-chosen examples and has a particularly clear way of illustrating the I/me issues:

9. Nominalizations and gerunds, and other fatty words.

Nominalizations are words that have been forced into being nouns. It wasn’t their natural state, and it shouldn’t be. As in:

These are all grammatically correct, but nominalizations are often a red flag of one of the other common writing sins: Using the passive voice. Once you know how to spot them, spend the time to rework your sentences so they become verbs again. Your writing will automatically become more direct and fresh.

Other signs of passive voice are gerunds — anything that ends with an “ing”. You can’t kill them every time, but try to:

I used to write for someone who insisted I never ever use the word “that”. It made for weak writing, he said. It definitely made for a lot of rewritten sentences for me. I don’t think it’s wise to completely ban the use of “that”, but there are definitely more of them floating around than need be.

(Editor’s note: I don’t agree with Pam’s comment on nominalizations — I am very fond of all those words and I’m glad they exist — but this is her post and that is her opinion, so it stands. And if you’re curious about how those words came into use as nouns, check out the Online Etymology Dictionary. How about that “intermeddling“? What a fun word!)

According to the Associated Press Style Book, “Internet” is supposed to be capitalized. At least until June 1st, 2016. After that, capitalizing “Internet” will no longer be accurate.

So there’s your reward for reading all the way to the end of this post. Come June first, you can correct all those silly people still capitalizing “Internet”.

(Editor’s note: You may have noticed that different publications have different spelling, grammar, and punctuation conventions. Many rely on the AP style guide; others look to the Chicago Manual of Style; still others create their own rules.

Your local daily newspaper or webzine probably has different ways of handling language than The New York Times or The New Yorker. That’s okay. What’s important is that you know how your organization prefers things to be, and that you capture this information in a “house style guide.” Share this guide inside your organization so that you all adhere to the same rules and are consistent.

As an example, Act-On has no plans to change how and when it capitalizes “internet.” Our rule, as of this writing — these things change, is:

Just so you never have to look them up again, here’s a recap of the ten writing mistakes:

What do you think?

Everyone has a pet writing peeve. What’s yours? And, did we make an irritating mistake in this post? Feel free to vent in the comments.

Now that you know the embarrassing mistakes to avoid, it’s time to start focusing on your content! To cook up really great marketing content that will get your prospects to love your brand and want your product, download — The Perfect Recipe for Creating Killer Marketing Content.

This article was written by Pam Neely from Business2Community and was legally licensed through the NewsCred publisher network.

The Challenges of Lay Witness Testimony in the Courtroom