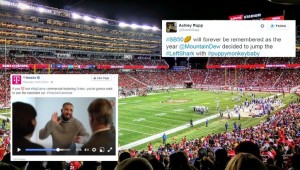 The Super Bowl is one of the biggest global events for both the sporting world and for brands. While it’s just two teams that go head to head on the field, for global players from Amazon to Coca Cola, the Super Bowl is a chance to show off the full scale of their marketing arsenal to a global audience.

When such large sums of money are being invested into Super Bowl ad campaigns, going viral is pretty much a must, so we decided to use social media analytics to take a look at the lessons brands can learn from what worked and what didn’t work at Super Bowl 50.

Lesson 1: It’s All About the Pre-Game

There was a time when Super Bowl ads were about the actual half-time slot. That time has long since gone. By the Friday before the Super Bowl, the most viewed Super Bowl commercials had already amassed well over a million views with top performer Hyundai having received almost 12 million views for one of their Super Bowl videos. As the virality map below shows, the majority of the discussion of this video stayed on YouTube but there was still significant spread to other media types, particularly on forums and on Twitter.

On Twitter, the story was much the same with social media analytics showing that hashtags for the Super Bowl were launched well in advance of the big game with Doritos in particular launching their ad competition at the very beginning of the year. Their hashtag #crashthesuperbowl saw steady usage online a month in advance of Super Bowl 50:

In the week leading up to the big game, the attention ramped up significantly with 230,000 uses of the different brand hashtags, led by Avocados From Mexico’s #AvosinSpace:

So what does this show?

The Super Bowl is increasingly becoming like Christmas, with no time too early for brands to begin promoting their commercials. If anything, not making the most of Super Bowl build up buzz is now a significant missed opportunity in terms of building brand awareness on social. With so many millions spent on Super Bowl campaigns, it’s no surprise that brands are devoting an increasing amount of time making sure their viral marketing efforts are not overly reliant on success on the day.

This year’s Super Bowl commercials were a mix of the funny, like Heinz’ Meet The Ketchups ad, the inspiring — Mini’s DefyLabels campaign — and the downright weird…#puppymonkeybaby? But looking at the videos and hashtags that generated the most conversation, it was humor that drove the most instant discussion.

Esurance’s #EsuranceSweepstakes was by far the most used hashtag with over 2.5 million mentions over Super Bowl weekend and even though the idea for the campaign was simple, it was backed up by consistent, often humorous tweets from their Twitter account.

Mountain Dew’s #puppymonkeybaby was the second most used hashtag with Avocados from Mexico’s #AvosinSpace not too far behind. Both had a clear focus on creating funny/weird campaigns and #puppymonkeybaby in particular performed well on both YouTube and Twitter. Budweiser’s #GiveaDamn campaign urging people not to drink and drive also performed well, but even this campaign featured a powerful message combined with humor.

Simply driving a large volume of conversation or views may not be the be all and end all for brands when it comes to viral marketing, but adding a touch of humor can even make a serious message travel further. There is no doubt that Mini’s #DefyLabels and Colgate’s #savewater had powerful messages, but compared to Budweiser’s #GiveaDamn campaign they struggled to drive the same level of attention.

Lesson 3 — #RIPTwitter? Not for Live Events

Before Super Bowl 50, the hashtag #RIPTwitter began trending with the social public feeling that Twitter’s struggles to drive revenue and innovate effectively would spell the end for the social platform.

But when it comes to live events, Super Bowl 2016 showed Twitter is still the platform of choice for viral marketing. On the day of the game itself, Twitter produced over 400,000 retweets from brand Twitter feeds (and this is excluding Esurance’s massive campaign) compared to just under 100,000 shares from brand Facebook pages.

Where Facebook excelled was in the week leading up to the Super Bowl, rather than during the game itself. In this period, the world’s largest social network drove over half a million shares led by T-Mobile’s #YouGotCarriered campaign featuring Drake which was shared almost 80,000 times before a ball had been kicked. Brands’ Twitter feeds by contrast were only able to deliver around 160,000 retweets.

The Super Bowl is most definitely a multi-channel experience — whether you’re watching for the game or the ads. Social media analytics data shows that people are discussing brands before, during and even after the game on Facebook, Twitter and YouTube, with Facebook and YouTube driving the most attention before the game and Twitter the platform of choice during the game.

What to do next year

So to recap, based on social data here’s what brands should keep in mind when planning their viral marketing campaigns for Super Bowl 51:

— Start early to capitalize on the substantial pre-match buzz

— Even if you want to spread a serious message, humor doesn’t hurt

And the key link between all these points? To really get to grips with your social media performance, measurement is key on every channel, as without this, success is very hard to define.

To discover how to improve your marketing efforts using social intelligence, have a demo with one of our expert consultants.

This article was written by Richard Sunley from Business2Community and was legally licensed through the NewsCred publisher network.

How to Approach Online Discussions from a Macro and Micro View