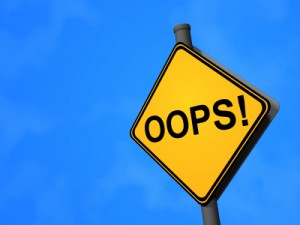 Social networks have become an indispensible tool for job seekers. LinkedIn, Facebook and other sites give professionals in all industries a chance to make connections that lead to new career opportunities, as well as another way candidates can show off their skills and experience to potential employers.

While that can be a positive if job seekers present themselves well, many people have experienced the negative side, too. In a recent CareerBuilder survey, 43% of hiring managers said they’ve decided not to hire someone based on what was found on the candidate’s social networking profiles.

Here are the top mistakes job seekers make on social networks that can end up costing them career opportunities:

By now, this should be common sense, but it still happens enough that it’s worth mentioning. Half of the 2,100 hiring managers surveyed by CareerBuilder said they’ve eliminated candidates from consideration because of inappropriate posts on social networks.

What do recruiters and managers find to be inappropriate? These were the types of content most likely to elicit negative reactions, according to Jobvite’s survey:

Nearly every job requires some amount of written or verbal communication, and those skills are important for professionals in all fields. Therefore, that’s one the of the things a hiring manager will pay attention to when looking at social networking profiles.

Among the 1,600 hiring managers surveyed by Jobvite, 61% said that spelling and grammar mistakes in social media posts are held against candidates.

On the flip side, 43% of the hiring managers polled by CareerBuilder said candidates have increased their standing because their profiles conveyed great communication skills.

3. Leaving too much out

As more recruiting takes place on social networks, job seekers need to look at their profiles the same way  employers do – as compliments to their résumé.

Profiles should include job experience, skills, certifications and other relevant professional information. But social media also gives job seekers a chance to include information beyond what can be put on a resume.

Some interesting (and appropriate) personal details can help job seekers stand out and present a more well-rounded image.

There have been plenty of stories about employees getting in trouble for talking badly of their jobs, employers or managers on social networks. But not only can that get someone fired, it can also hurt the person’s chances of being hired elsewhere in the future.

A lot of hiring decisions are made based on candidates’ attitudes, and those complaints don’t help. That’s why a third of the hiring managers surveyed by CareerBuilder said they’ve taken a candidate out of the running for badmouthing another employer online.

One of the biggest mistakes a job seeker can make is lying about skills or experience, so it’s important to avoid giving any kind of sign that may be the case.

When employers have multiple sources of information about candidates, those job seekers must make sure their social networking profiles are consistent with their résumés, and with each other.

Unfortunately, it’s not just job seekers’ own mistakes that can hurt their prospects, but also those made by people they’re connected to online.

That’s why it’s important to be diligent about removing inappropriate comments from others and trying to connect with successful professionals on those sites.

Some job seekers make mistakes of omission when it comes to their social networking profiles. Those sites are a good place to mention accomplishments that can help potential employers take notice.

That can include professional awards and other accomplishments, as well as items that aren’t work-related. For example, 65% of the hiring managers surveyed by Jobvite said they looked favorably on posts about volunteer work or donations to charity.

Sam Narisi is a senior technology editor for Progressive Business Publications.  He helps businesses and individuals understand technology’s upside and impact as editor in chief of The Information Technology Advisor newsletter.

Obesity Rates Are Significantly Rising Among US Children

How to Write a Better Paper Using Key Sentences