Amazon is Using Logistics to Lead a Retail Revolution 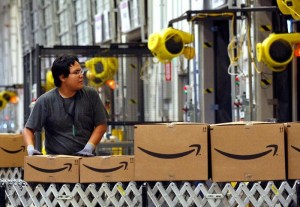 Amazon is on the path to fundamentally changing the way you shop with a few, quiet experiments in logistics.

Yes, delivery logistics, once a staid business, is now the frontline of a tectonic shift that’s taking place everywhere from the United States to Europe to China, largely thanks to Amazon.

In the past two years a diverse set of firms, including German electronics retailer Media Markt, department stores Bloomingdale’s and Macys, and Internet giants Google and Ebay, have followed Amazon by launching same-day delivery service. And Amazon has upped the game by introducing one‑hour delivery in major American cities and even a Wi-Fi-connected button customers can push to re-order select products right away.

For customers, delivery is becoming a when-I-want-it-where-I-want-it service. So e-tailers, traditional retailers, and third‑party logistics players started using customer-determined delivery speeds, on‑demand time slots, and flexible delivery locations to separate themselves from the pack. Once the stuff of science fiction, in the new world, customers can get what they desire almost immediately with the press of a button. The question is: Who owns the customer?

Amazon is hustling logistics players down this road to more customized delivery options as the company seeks to differentiate itself and keep customers under its banner throughout the entire shopping process. Worried large consumer markets like the U.S. and Europe lack enough sorting and last-mile delivery capacity to take care of the growing number of parcels, Amazon is investing heavily in regional warehouses and information technology. Amazon is rolling out same-day, one-hour, and Sunday delivery services, and even a nascent drone program.

Amazon is gauging its strategy country-by-country with the goal of securing capacity and increasing customer convenience. In 2014, it snapped up stakes in two European logistics companies, Yodel and Colis Privé, to gain partial control of 6,700 delivery trucks, handling 170 million shipments per year in the United Kingdom and France. Amazon will likely gain majority control over Colis Privé early this year. Last year, the company introduced AmazonFlex, an Uber-like cargo service in major U.S. cities that registers private drivers to deliver Amazon parcels. Already this year Amazon announced the build-up of its own last-mile delivery service in Germany, where competition among logistics firms is most fierce. The first Amazon delivery trucks are already rolling in Munich.

Connect these dots, and Amazon is no longer a small-scale logistics firm. While this doesn’t erase Amazon’s need for other logistics companies (especially in rural areas and at peak times), it puts a dent in demand. The fight is on especially for delivery in the most dense and attractive urban neighborhoods.

For many logistics and parcel services, Amazon making its own deliveries is a prisoner’s dilemma. The danger a logistics player faces by having a high share of Amazon parcel volume is as great as the danger of this volume being in a competitor’s network. To counter a possible parcel delivery strategy by Amazon, a logistics company should start by getting its house in order, knowing its customers, and developing a good parcel mix in the network by limiting the portion of deliveries for e-commerce giants like Amazon.

Think like a customer. Predicting the delivery of a parcel within one hour is still an operator mindset, not a customer mindset. For customers purchasing goods online, selling them on customer-defined (and fee-based) delivery slots is far more innovative. Such innovations don’t necessarily need to be more expensive than old fashioned delivery models.

Further, postal and parcel companies need not be pure price-takers when confronted by e-commerce giants. Generally there are only a few parcel companies in any single-country market or region, so they possess some power to negotiate.

Innovative logistics companies are already maneuvering to resist Amazon. DHL, for example, set up allyouneed.de, Germany’s third-largest online market place, with more than 10 million product listings. By moving upstream in the value chain, DHL now profits from a stable base of parcel volumes.

Alibaba’s logistics partner, ZTO Express, announced it was launching a China-to-Europe express delivery service with La Poste, the French post office. There is certainly potential for Alibaba to expand such partnerships and many negotiations with players in the U.S. and Europe ahead. More radically, it could fulfill shipments using European warehouses and local logistics networks. This would hit Amazon where it lives, by getting decent quality but significantly cheaper products to customers at scale, and nearly as fast as Amazon does now. Such a move would be disruptive for other online (and potentially off-line) retailers, too.

Another approach is to stop trying to beat the e-commerce giants and develop partnerships instead. A long-term partnership would give Amazon the control and access it requires while protecting the partner company. Given the uncertainty about reactions from other e-tailers, this strategy might not be easy, but it is certainly worth considering. Besides the classical path of a volume-based partnership, there also may be room for more innovation-based partnerships.

If logistics players and retailers want to continue to own their customers, they must revamp their processes from the perspective of the final customer, with a focus on quickly removing hassles. Soon, receiving packages within an hour of ordering them or at the time and place specified at no extra charge could become the new standard in cities.

For the strongest e-tailers, those that can already supply goods faster than once thought possible, these are giddy times, as their empires rapidly expand. Traditional retailers may find themselves cornered unless they can meet the demands of customers who want to shop anywhere, any time. Logistics companies, too, will need to think hard about how they can better serve their e-tail clients. They’ll need to be fast, flexible, and much more innovative, or risk being pushed off the map altogether.

This article was written by Joris D’Inca from Forbes and was legally licensed through the NewsCred publisher network.

The Benefits of Age and Experience in the Military

Why Communication is a Critical Skill for Engineers