One of the greatest benefits of serving in our nation’s military is the ability to earn a degree at virtually no cost. Speaking from personal experience, I was able to earn my bachelor’s degree while serving on active duty by using tuition reimbursement. As a result, this freed up my GI Bill education benefits to focus on graduate school as a veteran.

Perhaps most surprising, I recently discovered that because I served in two branches of the military, one pre-9/11 and one post-9/11, I still have access to post-9/11 GI Bill benefits for a Ph.D. or Juris Doctor. Thanks to the U.S. military and my ten years of service, I will reach a terminal degree without having spent a single penny.

You don’t have to wait until you’ve transitioned out of the military to make the most of your benefits. In fact, you can get a head start using your military tuition assistance (TA).

I Found AMU to be the Best Fit for My Schedule

As an active-duty servicemember, I found that American Military University (AMU) offered the most flexible schedule and, as working professionals themselves, my instructors understood the unique demands of military service. Many of my fellow airmen from my squadron were enrolled at AMU as well. After asking around and performing some research, I found AMU to be the best fit for my busy schedule in AWACS maintenance.

AMU is affordable too, without sacrificing quality. The university recently introduced a groundbreaking and new military tuition grant that caps tuition at the military TA level of $250 for master’s education, similar to their existing undergraduate rate. It’s meant to help active-duty personnel earn their undergraduate or master’s education, without incurring financial debt while studying at AMU. In an era when college tuition continues to rise and more than 44.2 million people owe more than $1.5 trillion in student loans, the grant comes as welcomed approach to helping our military start their next chapter debt-free. 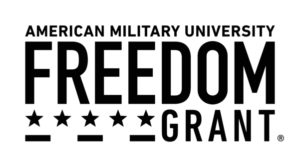 If you serve in the U.S. Armed Forces, you have the freedom to pursue your undergraduate and master’s education at American Military University for zero out-of-pocket tuition.* The Freedom Grant is AMU’s military tuition grant, which expanded on January 1, 2020, to include master’s-level education, in addition to undergraduate education.

Through the grant, as an active-duty member of the U.S. Armed Forces as well as National Guard members and Reservists, AMU covers your tuition above the military TA cap of $250 per credit hour for undergraduate or master’s programs—plus you’ll receive course textbooks and ebooks at no additional cost through a university book grant, and the technology fee is waived. Find out more at AMUFreedomGrant.com.

Textbooks and ebooks are also provided through a university book grant at no cost for undergraduate and master’s-level courses.

Ask Around about AMU

Wherever you’re stationed, do what I did and ask around about AMU. Chances are you’ll meet fellow servicemembers who have studied at AMU. Additionally, AMU military education senior managers are located around the country, and who are available to discuss your academic and career goals. AMU’s reputation for putting servicemembers first is highly regarded. I know, because I lived it. I’m proud to have completed both my undergraduate and master’s degree online with AMU.

Thank You for Your Sacrifice

Earning a degree while serving on active duty is one of the best ways to leverage your education benefits. You earned those benefits when you volunteered and swore the oath.

Make sure that you maximize everything that you have earned and sacrificed for—there is no better way to prepare for your post-transition life than to make education a priority.

Thank you for all you do, and I’ll see you in the classroom!

A veteran of both the U.S. Army and U.S. Air Force, Professor Wes O’Donnell is a writer, presenter and filmmaker who has spoken at TEDx on data visualization and the U.S. Air Force Academy on leadership. Wes earned both his BA in International Relations and his MBA with a focus on IT Management at American Military University and has served as a university ambassador since 2013. Reach out to Wes on LinkedIn.

Wes O’Donnell is an Army and Air Force veteran and writer covering military and tech topics. As a sought-after professional speaker, Wes has presented at U.S. Air Force Academy, Fortune 500 companies, and TEDx, covering trending topics from data visualization to leadership and veterans’ advocacy. As a filmmaker, he directed the award-winning short film, “Memorial Day.”

The Path of Censorship