Are Human Beings the Only Technologically Advanced Civilization in the Universe?

Moon and clouds over the Pacific Ocean, as photographed by Frank Borman and James A. Lovell during the Gemini 7 mission.

There may never have been another intelligent, technologically advanced alien species in the entire history of the Universe. When you take into account that there may be 400 billion stars in the Milky Way, up to three potentially habitable worlds in many of these star systems, and some two trillion galaxies in the entire Universe, it seems like intelligent life is an inevitability. But our intuition can often lead us astray; what we feel is no substitute for science. The magnitude of the unknowns that abiogenesis, evolution, long-term habitability and other factors bring into the equation throws many of our assumptions about life into doubt. It’s true that there are an astronomical number of possibilities for intelligent, technologically advanced lifeforms, but the huge uncertainties make it a very real possibility that humans are the only spacefaring aliens our Universe has ever known. 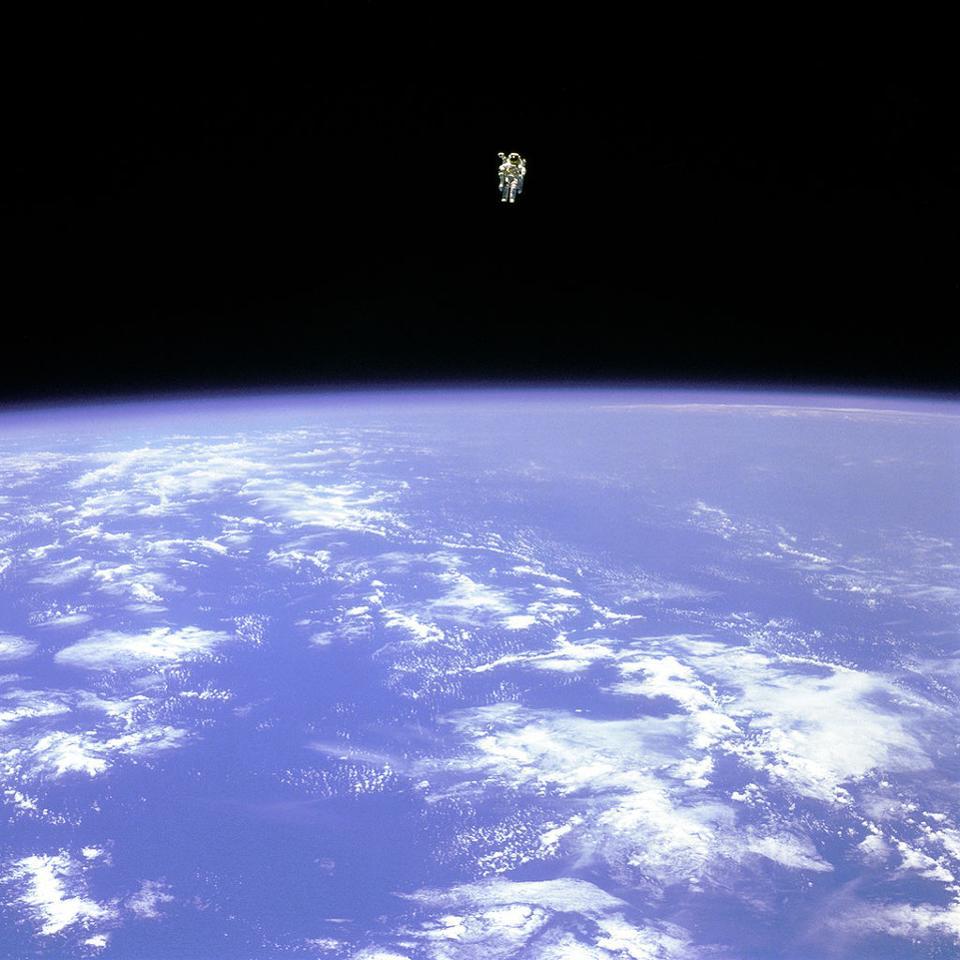 The longest untethered spacewalk ever, by NASA astronaut Bruce McCandless, aboard STS-41-B.

Back in 1961, scientist Frank Drake came up with the first equation to predict how many spacefaring civilizations there were in the Universe today. He relied on a series of unknown quantities that he could make estimates for, and ultimately arrive at how many technologically advanced alien species there were, at present, in both our galaxy and our observable Universe right now. With the advances of the last 55 years, many of those quantities we once could only estimate via guesswork are now known to an incredible degree of precision. 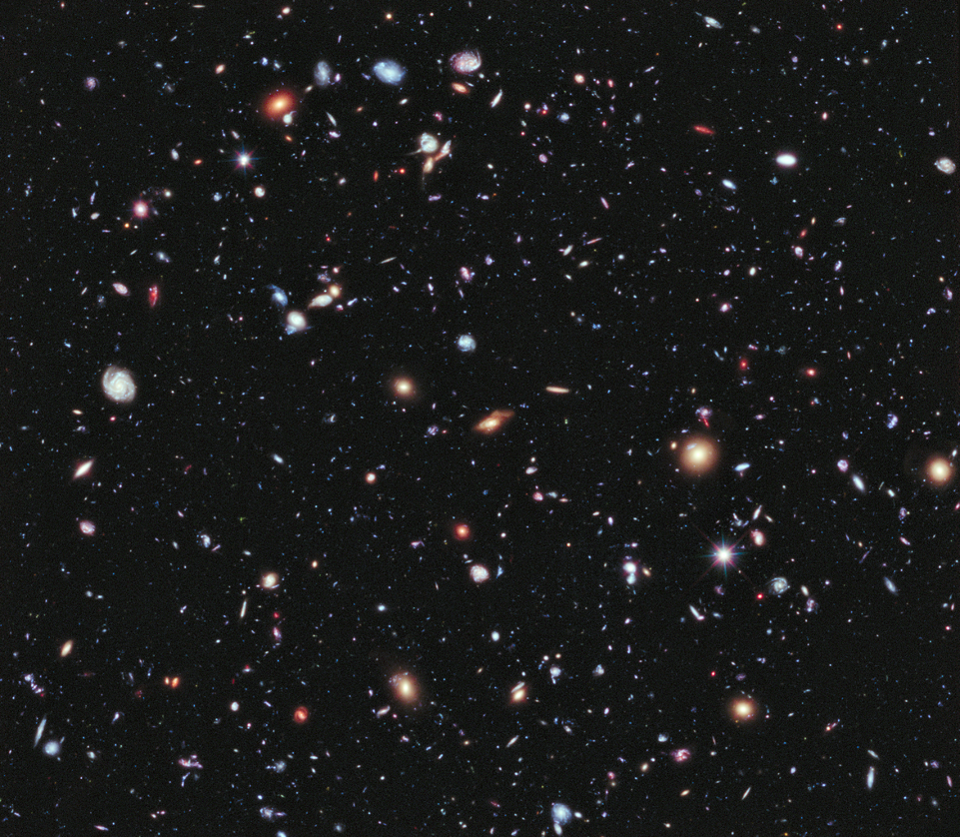 For starters, our understanding of the size and scale of the Universe has increased dramatically. We now know, thanks to observations made with space-based and ground-based observatories covering the full spectrum of the electromagnetic wavelengths, how big the Universe is and how many galaxies there are within it. We have a much better understanding of star formation and how stars work, and so when we look out into the grand abyss of deep space, we can calculate how many stars there are out there in the Universe, both now and over the entire cosmic history since the Big Bang. That number is huge — somewhere close to 1024— and it represents the number of chances the Universe has had, over the past 13.8 billion years, to produce life like ours. 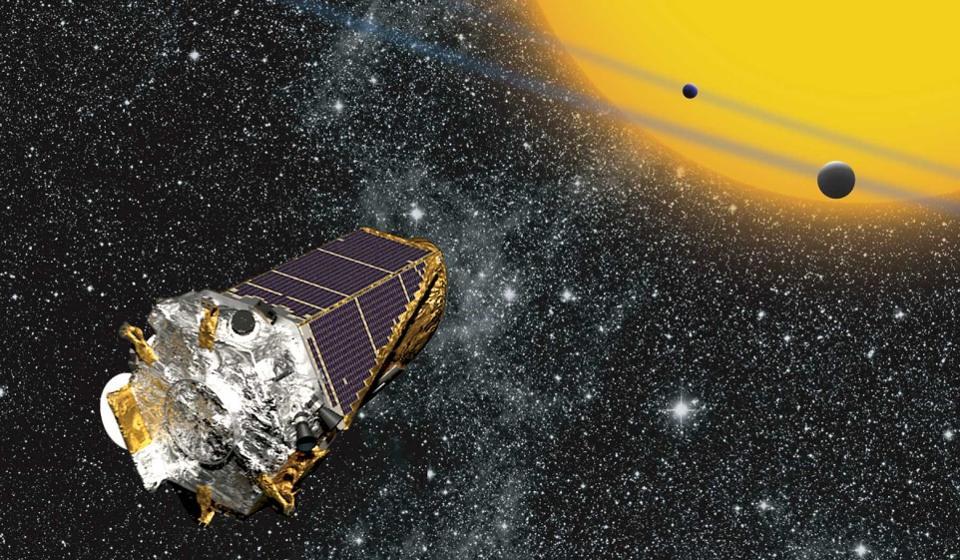 Illustration of the planet-finding space telescope, Kepler, from NASA.

We used to wonder how many of those stars had planets around them, how many of those planets were rocky and capable of having atmospheres like our own, and how many of them were the right distances from their stars to have liquid water on their surfaces. For innumerable generations, this was something we only wondered about. But thanks to huge advances in exoplanet studies, most spectacularly with the advent of NASA’s Kepler spacecraft, we’ve learned so much about what’s out there, including that:

So adding that all up, there are more than 1022 potentially Earth-like planets out there in the Universe, with the right conditions for life on them. 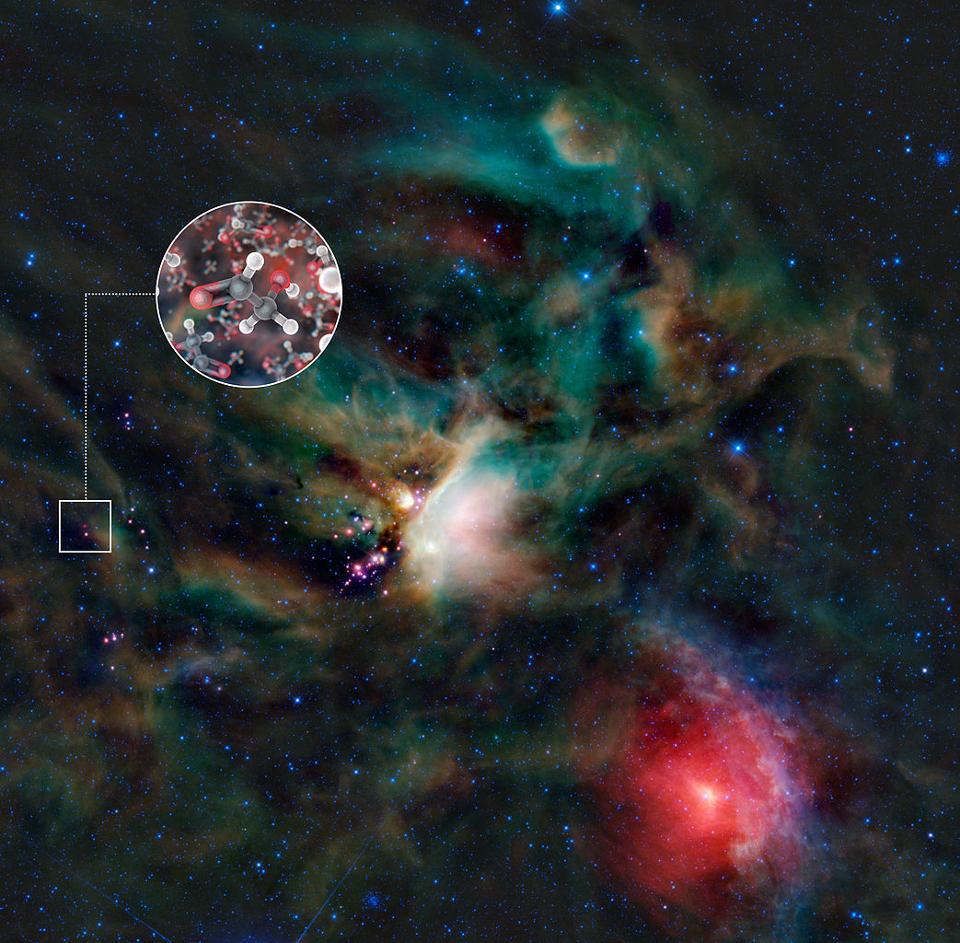 Sugar molecules in the gas surrounding a young, Sun-like star.

The situation is even better than that, because except for the very first generations of the very first stars, practically all of them come enriched with the heavy elements and ingredients necessary for life. When we look at the interstellar medium, at molecular gas clouds, at the centers of distant galaxies, at outflows from massive stars or even at our own galaxy, we find the elements of the periodic table — carbon, nitrogen, oxygen, silicon, sulphur, phosphorous, copper, iron and more — necessary for life as we know it. When we look inside meteors and asteroids in our own Solar System, we find not only these elements, but we find them configured into organic molecules like sugars, carbon rings and even amino acids. In other words, there are not only more than 1022 potentially Earth-like planets out there in the Universe; there are more than 1022 potentially Earth-like planets with the right raw ingredients for life! 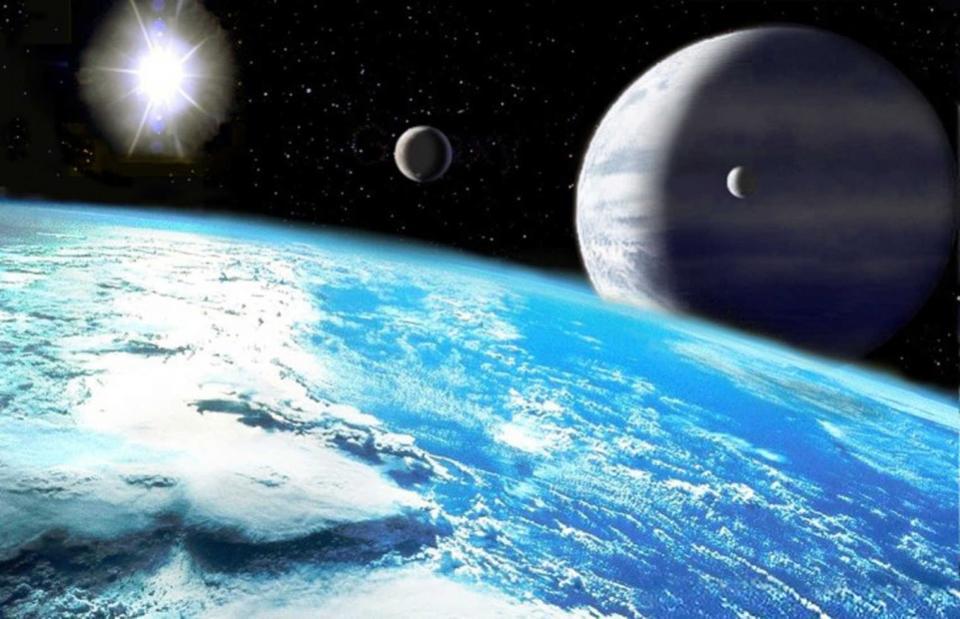 There ought to be lots of world that begun with Earth-like conditions, and we’re very close to quantifying a number of worlds like that, in our own galaxy and in the Universe, to a reliable precision.

But that’s where our optimism, if we’re being scientifically honest and scrupulous, ought to end. Because there are three big steps out there, in order to get a human-like civilization, that need to happen:

When Carl Sagan originally presented Cosmos in 1980, he claimed it was reasonable to give each of these three steps a 10% chance of succeeding. If that were correct, there would be more than 10 million intelligent, alien civilizations that have existed in the Milky Way galaxy alone! 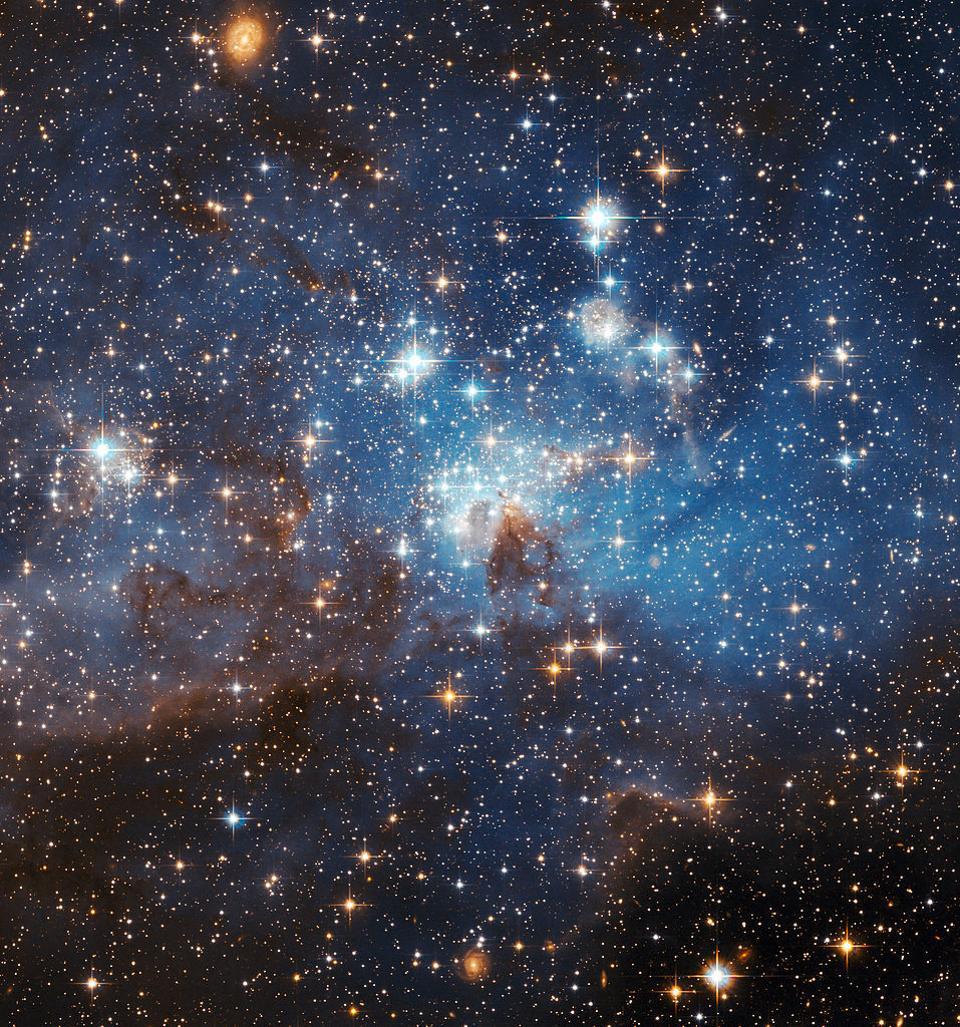 A stellar nursery in the Large Magellanic Cloud, a satellite galaxy of the Milky Way.

There are those who argue that it’s unrealistic to give these three steps a combined probability of less than 10-22, and therefore conclude that there must have been aliens elsewhere in the Universe. But this is itself a preposterous claim, based on no evidence whatsoever. Abiogenesis may have been common; it may have occurred multiple times on Earth alone, or on Mars, Titan, Europa, Venus, Enceladus, or elsewhere even outside of our own Solar System. But it also may be such a rare process that even if we created a hundred clones of a young Earth — or a thousand, or a million, or more — our world might be the only planet to emerge with life on it. 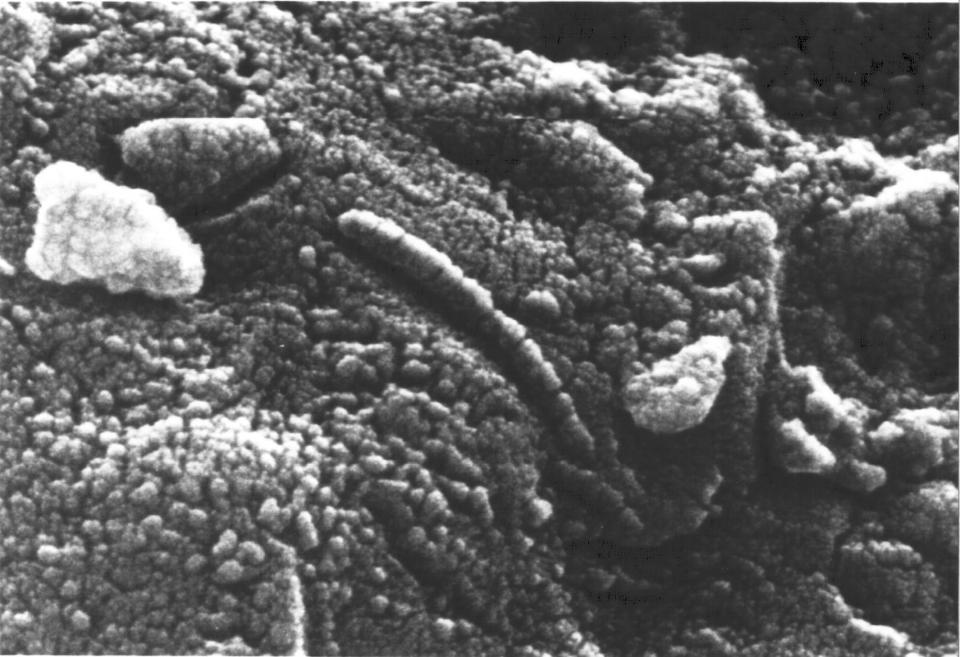 Structures on ALH84001 meteorite, which has a Martian origin. Some argue that the structures shown here may be ancient Martian life.

And even if life does occur, how fortunate do you need to be to have it survive and thrive for billions of years? Would a catastrophic warming scenario, like Venus, be the norm? Or a catastrophic freezing and atmospheric-loss scenario, like on Mars? Or would life wind up poisoning itself out of existence most of the time, as it almost did on Earth two billion years ago? And even if you had life survive for billions of years, how often would you get something like the Cambrian explosion, where huge, multicellular, macroscopic plants, animals and fungi came to dominate a planet? It could be relatively common, where maybe 10% of attempts make it, or it could be rare, where 1-in-a-million or even 1-in-a-billion are closer to the realistic odds. 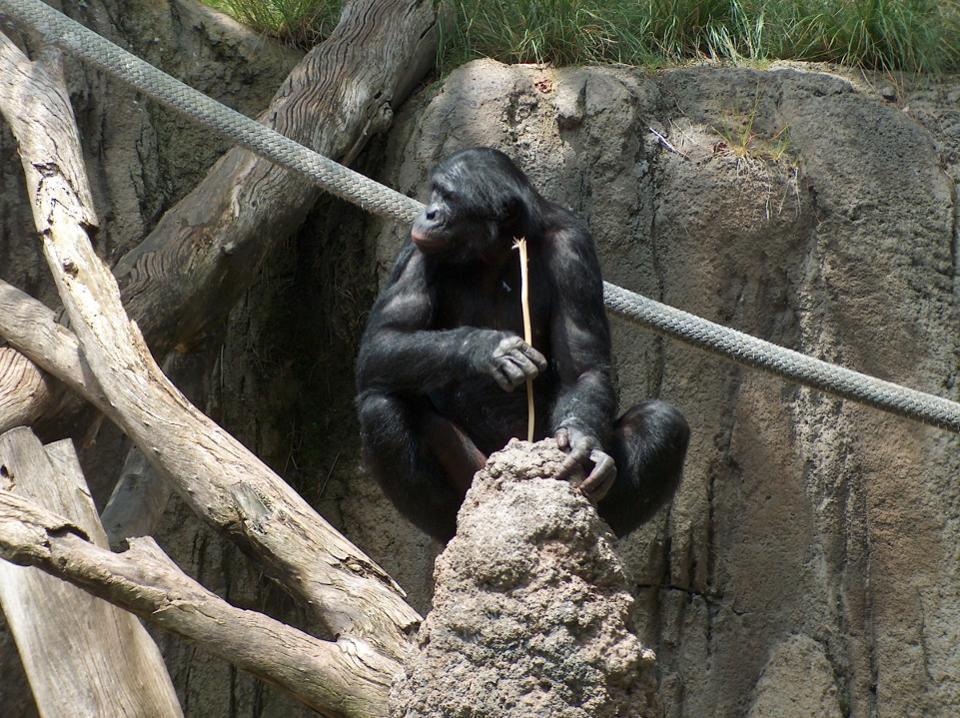 Bonobo at the San Diego Zoo “fishing” for termites.

And even if you get there, how rare is a tool-using, technology-developing, rocket ship-launching species like a human? Complex reptiles, birds and mammals that could be considered intelligent by many metrics have been around for tens to hundreds of millions of years, but modern humans came about less than one million years ago, and we only became what we’d consider “technologically advanced” in the last century or two. Is there a 10% chance that if you make it through the previous step, you get to a spacefaring civilization? Or is that more like one-in-a-thousand, one-in-a-million, one-in-a-trillion, or even far, far worse? 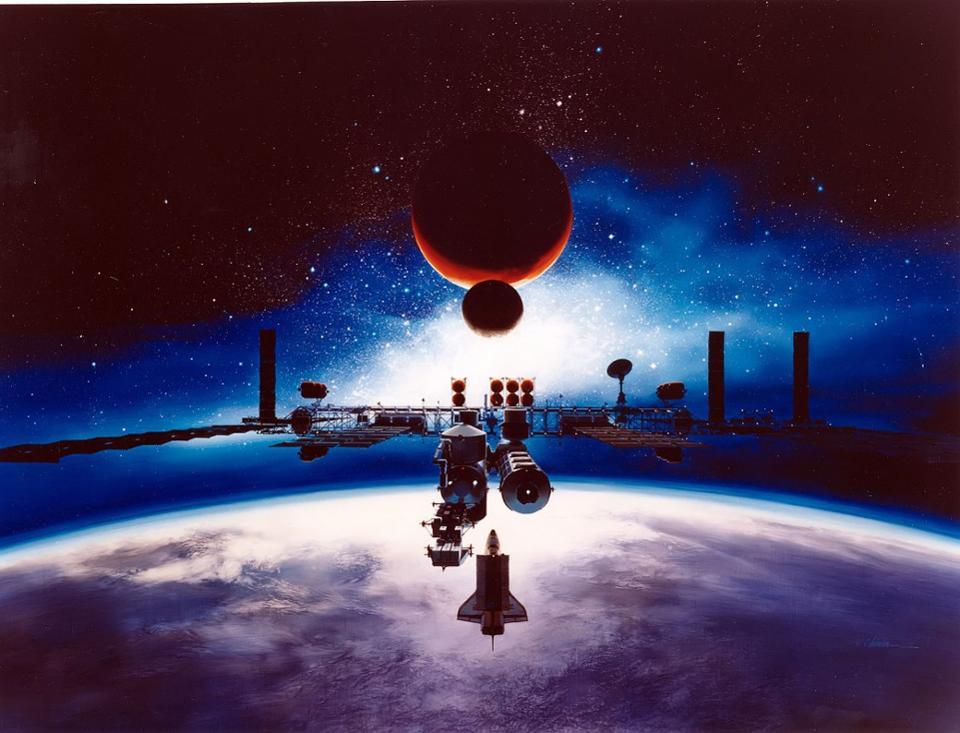 Alan Chinchar’s 1991 rendition of the Space Station Freedom in orbit.

The truth of the matter is, this: we don’t know. We know the Universe gives intelligent life a very large number of chances, on the order of 10-22. And we know that there’s only a small probability of going from a chance at life to a spacefaring, technologically advanced civilization. What we don’t know is whether that chance is something like 10-3, 10-20, 10-50, or any other number. We know that life like humans arose once in this Universe, at least, so the probability must be non-zero. But beyond that? We need data. And no amount of speculation or pronouncements will substitute for that information; we’ve got to find it in order to know. Anything else, despite what prognosticators of all types may claim, is nothing more than guesswork.

This article was written by Ethan Siegel from Forbes and was legally licensed through the NewsCred publisher network. Please direct all licensing questions to legal@newscred.com.

Podcast: How to Talk to People Who Do Not Listen

Why Relying on Willpower to Get Healthy Is a Bad Idea