How to Study Religion 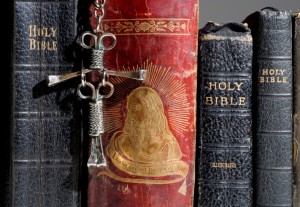 I am not a mechanic.  I do not have any skills that even remotely resemble those of a mechanic.  So whenever my vehicle has a mechanical problem, it is best for everyone that I ask for help from someone who has proven mechanical expertise.  After all, the skills need to match the situation.

This principle also applies to the study of religion and spirituality.  In order to study religion effectively, we need to use a certain set of skills.  But what are those skills, and how do we access them?  Religion and spirituality are multi-faceted, and it should come as no surprise that the required skills are equally diverse. The study of spirituality is an exciting and rich activity, and involves the effective use of literary criticism, theology, anthropology, historiography, and more.

Literary Criticism.  For many students of religion, especially near the beginning of their studies, one of the best ways to study a particular system of spirituality is through its sacred texts. After all, we can touch the sacred texts, read them, pour over them, and most importantly, make our own observations about them. But where did the texts come from?  Who wrote them?  Do we have access to original manuscripts or edited copies?  What genres are contained in the texts?  These are some of the questions that a literary critic explores.

We can divide literary criticism into three general areas: the sacred text itself, the origin of the text, and the literary style and characteristics of the text.

The study of the origin of the text is sometimes called documentary criticism. Who wrote the sacred text?  What sources, either oral or written, did they use?  For example, was the book of Isaiah written by one, two, or three authors? If there is more than one author, who compiled the final version?  Similar to textual criticism, although this area of study is exciting, it is not easily accessible by the beginning student.

The study of the literary characteristics of the text has many names — narrative criticism, structural criticism, rhetorical criticism, and more. The value of this approach is that it is accessible to the majority of readers and students, even if the text is an English translation from another language. Does the author use a repeated term for emphasis? Are there two contrasting ideas in the text? Can an introduction, central point, and conclusion be discerned? These are some of the questions that a literary critic asks, and they are foundational to the careful study of any of the world’s religions.

Historiography. As the term suggests, this is the study of history. What factors influenced the development of the religion? What were the geographical, social, or political elements that affected how each system of spirituality was formed? What does archeology tell us about each religion’s origin? Historiography is concerned with “what really happened” with a religion prior to our individual personal experience with it, and the answers to the questions can usually be quickly found in most introductions and surveys.

Psychology. In this wide ranging field of study, it is possible to narrow the interaction between religion and psychology into two general motivations — extrinsic and intrinsic. Extrinsic motivations can describe the usefulness of religion to an individual: a sense of peace or comfort, social status, etc. Intrinsic motivation is evident in a person who has internalized their spiritual beliefs and they authentically “live out” their religion. A student’s questions about the psychology of religion can be explored through both personal interviews and published studies.

Theology. What is the logic of spirituality? What are the theories and truth claims of religion? Can the truth claims be systemized into various categories, both minor and major? These are some of the questions that theology asks. Using the existence of God as an example, theology can use both a religion’s sacred texts and also its traditional teachings, to explore questions of ontology and cosmology. In terms of the study of religion and spirituality, it is this discipline that has generated the highest number of books and academic articles.

Phenomenology. Rather than explore truth claims, societal norms, or spiritual influences, phenomenology instead studies religion “as it is”. It attempts to describe religious or spiritual experiences without evaluating any internal or external factors. Using prayer as an example, whereas psychology explores why a person might be motivated to pray, phenomenology explores only how a person prays — their words, their posture, and their emotions.  In one sense, phenomenology might be the easiest discipline for a student to apply — all they have to do is look at the spiritually active people around them and observe the behaviors exhibited.

Now, think of your own spiritual experiences, and take up the following challenge. Work through each of the methods of study and apply them to your religious beliefs. For example, have you looked at your own spirituality through the lens of literary criticism? Have you actually read the sacred texts? What happens when you explore the psychology of your beliefs or the social impact of your religious actions? Have you ever wondered about the historical context from which your chosen religion arose?

One of the most exciting elements of the study of religion is that it is firmly planted in the world around us. Perhaps this will be the year that you “dive deeper” into spirituality and begin to explore, discover, and discern in ways that you have not done so previously.

Mark D. Wessner, PhD, is an Associate Professor of Religious Studies, and was the first religious studies instructor at APUS (the first course was taught in 2002).  Professor Wessner enjoys exploring the connections between spirituality and technology, has a special interest in sacred texts and their literary features, and can be followed on Twitter (@wessner).