How We Should Be Celebrating the History of Memorial Day 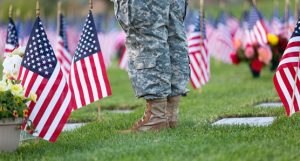 Memorial Day is a day for remembering the men and women who died while serving in the armed forces. It should not be confused with Veterans Day, which celebrates the service of all U.S. military veterans, living or dead. Formerly known as Decoration Day, Memorial Day is observed as a national holiday on the last Monday of May and unofficially marks the beginning of summer.

With the fun events that typically take place during this holiday, it’s important to pause and reflect on how this day came to be. It is much more than a three-day weekend. Here is a history lesson to take with you before you go into vacation mode.

While the origins of Memorial Day in the U.S. are disputed, there is evidence that the practice of honoring war dead by visiting and decorating their graves began during the Civil War in both the North and South. On May 5, 1868, three years after the Civil War ended, the head of a Union veterans’ organization – the Grand Army of the Republic (GAR) – established Decoration Day as a time for the nation to decorate the graves of the war dead with flowers. Maj. Gen. John A. Logan declared that Decoration Day should be observed on May 30. It is believed that date was chosen because flowers would be in bloom all over the country. (Read more about Memorial Day History.) This practice of decorating the graves of the war dead gained popularity during World War I.

Nationally, Arlington National Cemetery conducts an annual Memorial Day Ceremony to include a Presidential Armed Forces Full Honor Wreath-Laying Ceremony at 11 a.m. ET at the Tomb of the Unknown Soldier, to be followed by an observance program hosted by the Department of Defense in Arlington’s Memorial Amphitheater. A prelude by the U.S. Air Force Band begins in the amphitheater at 10:30 a.m. ET.

If you don’t live in or near our national capital, tune into the National Memorial Day Concert at 8 p.m. ET on May 29, 2016. This event is broadcast by PBS. Locally, many communities conduct Memorial Day parades and services.

Wherever you may be at 3 p.m. local time on Memorial Day, please take a moment to observe tradition. According to the 2000 National Moment of Remembrance Act, passed to emphasize the meaning of Memorial Day, all Americans should “voluntarily and informally observe in their own way a moment of remembrance and respect, pausing from whatever they are doing for a moment of silence or listening to ‘Taps.’” Other ways in which anyone can demonstrate their respect include:

Enjoy your Memorial Day weekend. Spend time with family and friends. Go to the beach, have a barbecue or simply enjoy some time off, but remember our fallen heroes who gave their lives so that we may live free. Let’s keep this tradition alive.