Long-Term Effects on Cognition After Trauma to the Brain 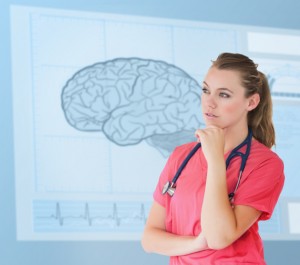 Traumatic brain injury (TBI) is a clinically evidenced disturbance of normal brain functioning due to a mechanical injury. TBI can occur in athletes, on the battle field, in a car accident, and even at home. Depending on the severity of an impact, TBI is categorized as mild (concussion), moderate, severe and penetrating.  According to the CDC, every year, at least 1.7 million TBIs occur in the United States that contribute to one-third of all injury-related deaths.

About 75 percent of TBIs that occur each year are concussions or other forms of mild TBI. Symptoms immediately after TBI can be as mild as headache and dizziness and as severe as loss of consciousness and memory problems. Depending on the severity, patients may recover with time and present no visible deficits.

However, on a molecular level TBI leads to both primary and secondary injury events. Secondary injuries include inflammatory events that cause greater neuronal and glial (non-neuronal) cell loss and are believed to contribute to chronic outcomes. The secondary injury cascade of cell death that follows traumatic brain injury is a target for neuroprotective agents and therapies aimed at sparing tissue and function. Many studies indicate that inflammation plays a critical role in setting forth long-term consequences of brain trauma.

The long-term consequences of TBI are on the cognitive, neurological, psychiatric, social, and behavioral levels. TBI may lead to depression, aggression, and social isolation.

Early studies concluded that TBI has a localized impact on the central nervous system and its associated functions. However, recent evidence indicates a more systemic involvement that, besides leading to higher risks of progressive dementia, can cause endocrine dysfunctions. Thus, TBI leads to more chronic health conditions than originally thought.

On a cellular level, experimental and clinical data have demonstrated that TBI results in a progressive loss of myelin, the substance that insulates conducting fibers in the central nervous system, allowing impulses to travel faster. Many of the behavioral abnormalities associated with TBI have been proposed to result from death of neurons, diffuse axonal injury, and post-traumatic injury mechanisms that lead to circuit dysfunction and brain damage.

Some imaging studies have also emphasized the complexity of white matter regions of the brain and relationships to cognitive ability. In one of my studies I showed that mild TBI leads to vulnerability of oligodendrocytes (myelin-producing cells); these cells support the circuits necessary for communication between various brain regions. This may be yet another mechanism underlying abnormal brain function after TBI.

Strategies to minimize the chronic effects of TBI include therapeutic interventions targeting secondary injury events. Several drugs and therapies are being tested with the aim to decrease secondary cell loss.

One of the therapies that I have been studying is therapeutic hypothermia that involves lowering the brain temperature to 33ºC. The findings so far demonstrate that moderate post-injury brain hypothermia can provide protection from sensorimotor and cognitive behavioral deficits as well as neuropathology for some instances of TBI. Additionally, hypothermia decreased cellular vulnerability after TBI.

Dr. Lotocki earned a PhD in Physiology and Biophysics from the University of Miami School of Medicine where he worked on Central Nervous System cell death after brain injury. He taught physiology and biophysics to first and second year medical students at the University of Miami School of Medicine and was a senior research associate in the Department of Neurosurgery at the Miami Project to Cure Paralysis. He has contributed to over 20 peer-reviewed publications and over 30 published abstracts in the area of traumatic brain and spinal cord injuries and therapeutic interventions.

Why Relying on Willpower to Get Healthy Is a Bad Idea

How to Prepare Your Online Classroom for a Successful Session

The Use of Drone Technology Is Continuing to Expand