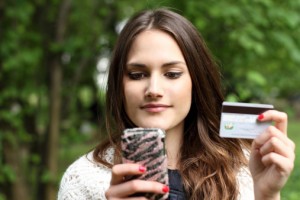 Everywhere we go we see them: people glued to their smart phones, seemingly oblivious to the world around them. In years past, our mobile devices and apps were utilized for talking, texting and playing games. No longer. The ubiquitous use of mobile devices has changed the way we shop, altered our expectations of how we interact with retailers and what we expect from them, and is a driving force behind innovation.

How we access the Internet is changing, with an increasing number of us using a mobile device instead of a computer. In the fourth quarter of 2012, 18 percent of website traffic was driven by mobile devices. Just one year later, the number increased to 27 percent.

Also, the percent of time consumers spend using applications versus a Web browser is increasing. In 2013, 80 percent of the time spent on mobile Internet devices was through an app. In 2014, that number increased to 86 percent. Consumers are no longer using a browser to access the Internet from their mobile devices. This trend continues seemingly unabated. In February 2014, for the first time in history, Americans used mobile apps and more than their computers to access the Internet. “2014,” says Flurry President and CEO Simon Khalaf, “was the year apps got down to serious business.”

Of particular interest is the role of retail in the app sector. While the general app market grew 76 percent overall, mobile shopping apps saw the largest gain, surging 176 percent. According to Target, customers in 2014 spent more time using the Target app than they did on the website.

More than 156 million Americans own a smartphone, and 42 percent said they used it to make a holiday purchase decision. Another 53 percent used a tablet. Sales year-over-year via smartphones increased 113 percent, and 86 percent for tablets. Is it any wonder 53 percent of retailers list mobile among their “key initiatives”?

What has the use of apps meant for some firms who have developed easy to use apps?

Apps can also be profitable. Apple’s sales of apps increased 50 percent in 2014, to $15 billion. Apple’s share is 30 cents of every dollar that comes into its app store, so this represents a cool $4.5 billion in revenue.

Mobile apps are unique in that, unlike Web pages, they do not have any links. An app lives, in essence, on a deserted island. This is seen by many as a negative factor. One can’t easily share the information found via an app. If I make a purchase via a store’s app, I am probably unable to send the link via email to my wife. An opportunity exists for the company that creates the first “shared” platform, one which permits easy communications between unique apps. The first company to successfully do this will have a lead on controlling the next gateway to the Internet, a cherished position to have.

Mobile devices and the rise of apps have created the new reality: consumers carry with them multiple stores at all times, 24 hours a day, 365 days a year.

Professor George Case has spent 20 years in the Retail Management industry, the past 12 as a business owner.  Joining a small business in the early 1990’s, he was instrumental in the company’s growth and expansion into multiple states.  Professor Case earned his MBA from Case Western Reserve School of Management in Cleveland, OH and his BA from Macalester College in St. Paul, MN.