The Continued Socioeconomic Impact of Apollo 11 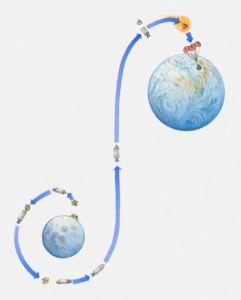 Forty-Five years ago this week NASA made dreams a reality. Humankind shot three men into outer space with a mission to land on the moon.  On September 12, 1962 President John F. Kennedy made his famous Moon Speech at Rice stadium in Houston, TX. He told a nation his dream to put a man on the moon. This speech helped kick off the Apollo mission. Though initially the great space race was another battle ground for the cold war with the USSR, it lit a fire of stimulus for multiple generations.

The Apollo 11 mission motivated a generation of innovators, technologists, mathematicians, dreamers, scientists and engineers. The Moon Landing confirmed that, if you could dream it, arouse it, campaign it, and finance it, almost anything could be accomplished. The Apollo 11 Mission had three major factors:

The Apollo program delivered benefits to 6,300 inventions that we use on a daily basis such as microwaves, satellites, and computing to air treatment and countless other spinoffs. They launched industries such as Intel that were impossible before NASA. It created optimism in the public and in future consumers.

50% of the U.S. didn’t want to fund the Apollo mission. This stunning achievement required the investment of about $25 billion, experts say – well over $100 billion in today’s dollars. (During the height of the Apollo program, NASA’s share of the federal budget was about 4 percent. Today, that figure hovers around 0.5 percent.)

For the United States, the moon landing inspired pride at home and wonder abroad–no small feat given that the country was mired in an unpopular war in Vietnam at the time and was being ripped apart at home by race riots and antiwar demonstrations.

By putting a man on the moon first the United States’ proved they were much more superior than the USSR.

It truly united nations around the globe. It made television king. Together an estimated 530 million people watch together on July 20, 1969 as human kind took one giant leap. We need to create and explore for the Next Giant Leap. NASA’s new goal is the “Path to Mars”; to put a human on Mars.

For everyone involved, Apollo 11 was a huge event in history. President Kennedy’s words on the Apollo 11 Mission of 52 years ago still have the power to inspire today. Exploration takes a national commitment. It is now the time for us to begin a new era of industrial innovation. We need to evoke the spirit of the lunar landing. We need to recall for peace and hope for the future.