U.S. Constitution and the U.S. Armed Forces: A Shared History 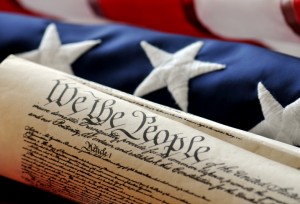 Article 1, Section 8 of the Constitution provides Congress authority to raise and support Armies and to provide and maintain a Navy.  The U.S. Constitution continues to shape the conduct of the branches of the armed forces. This can be seen today through the lens of the oath of office taken by service members when they join the military.

The Oath of Office

The first oath of office took place June 1, 1789. There are two oaths: one for officers and the other for enlisted personnel. Keskel (2002) tallies 19 legislative actions affecting the oath: 11 for the officer oath, three that address the enlisted oath, and five that address both.

U.S. Military Core Values and the Oath of Office

The tenets of the oath of office are well-matched with the core values of our armed forces. Keskel (2002) provides information on how the oath of office supports the core values of each branch the armed forces. The opening phrase, I will support and defend the Constitution of the United States against all enemies, foreign and domestic relates to the Air Force core value “service before self”; the Navy and Marine Corps core value “courage”; and the Army’s “selfless service, personal courage and loyalty.”

This sets the stage for what is to follow: I will bear true faith and allegiance to the same. This correlates with the core values of honor and integrity in all we do. I take this obligation freely, without any mental reservation or purpose of evasion, is similar to the Air Force core value of “integrity first,” “honor” for the Navy and Marines, and “integrity” for the Army.

The concluding phrase I will well and faithfully discharge the duties of the office upon which I am about to enter conveys support for the Air Force core value of “excellence in all we do”; Navy and Marine Corps “commitment”; and the Army core value of duty and respect (p. 9).

What Today’s Troops Have to Say

One of the privileges of being a professor at APU is the daily interactions in the classroom with military students. I live and work near Ramstein Air Base in Germany, which has the largest concentration of Americans living overseas.

Recently, I was in an on-base cafÃ© with a group of 15 Marines, airmen, and soldiers on their way home from a tour of duty in Afghanistan. After we chatted for a while and I thanked them for their service, the discussion turned to Constitution Day and the oath of office.

Each member of the unit remembered clearly the first time they came in contact with the oath of office. Some recalled it as an awesome experience they will never forget. A Marine stated that he “felt like I was becoming part of something much bigger than me.” Finally, an airman could only remember that his hand was shaking while reciting the oath.

Discussion turned to how the core values of each of the services came into play with their duty. One senior service member said that it represented, “committing myself to a lifestyle where lawful orders can get me through dangerous duty.”

Another declared how leaders set the example, both good and bad — and that establishing trust is important when considering core values. A Marine agreed: “Nice words and bumper stickers do not mean a thing without leaders leading in an exemplary manner.”

Others said the oath is a good framework for guiding behavior, as well as a gateway to the core values. In the words of a young enlisted Marine, “In a combat zone we are thinking about why we are there and our core values keep us grounded.”

This discussion made me feel proud of the service members who have served, both yesterday and today. It made me proud that we live in a country where a document such as the United States Constitution can still be relevant after all these years.

The U.S. Constitution and the U.S. Armed Forces have quite a shared history — one that is still going strong and one that bodes well for the future.

This article originally appeared on our fellow APUS blog, InMilitaryEducation.com.

About the Author
Ronald Johnson is an Associate Professor for the School of Business at American Public University. He is retired from the United States Air Force, and has been a professor at APU since 2007. He earned his Ph.D. from the University of Oklahoma and conducts research in the areas of Corporate Social Responsibility and mobile learning.

Podcast: Intersectionality and Understanding What Influences Your Identity

Use the New Nutrition Facts Label to Get Healthier This Year