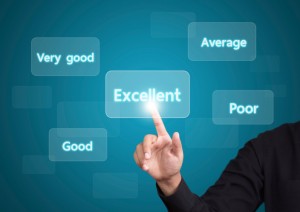 My experience was less than stellar. I did not put in anywhere close to 100 percent effort and my grades showed it. After three semesters I was tired of school–so tired that I did not start back up and take my education seriously until four years ago.

Fast forward to today and I can say with absolute certainty that my perception of education is a complete departure compared to what it was the first day I set foot on a college campus. I am now married and have three children, the latter point being a major factor in my desire to succeed in school.

In mid-June I attended the American Military University (AMU) 2015 Commencement and arrived a few days early so that I could be interviewed as an award recipient. One of the questions my interviewer asked me was surprising, and not because I did not have an answer. She said she knew that I had set very high goals for myself at AMU…then asked me why. My response? Why not?

Unfortunately when I look around I see too much mediocrity. People are satisfied with just being average, they settle for doing only what gets them by, they do not seek to excel. I ask myself where the pride is in that and it makes me think of the kind of example that is being set for our future leaders. The generations behind me — my children — deserve to see a community of hard-working, dedicated, committed individuals leading their country.

When I started my journey with AMU I began with a simple goal — to put in no less than my very best effort as I worked toward getting core classes out of the way. Attention to detail and time management helped me greatly and I took every bit of advice or feedback I was given from classmates and instructors into consideration.

In my overarching goal to graduate with honors so that my children could see what hard work, determination, and dedication could accomplish, I set mini-goals as well. I tried to keep the classroom discussions going by asking a lot of questions of my classmates, I carefully considered any perspectives or arguments that were opposite mine, I was always digging for deep web resources that contained interesting tidbits of information I could use, and I worked to be able to back up every single statement I made. Aiming to do these things consistently kept me focused and it prevented me from submitting work that would have me mumbling to myself that “I could have done better.”

Ultimately I want my children to see what is possible and I want them to see there should be no shame in seeking to excel in academics and beyond. The generations that follow us deserve to have an excellent example to follow, so I am trying to do my part.

I can understand and appreciate that everyone is at a different point in life, having different abilities and ideas of success. Whatever your circumstances and abilities, I encourage you to challenge yourself. This country needs excellence, not mediocrity. Raise your bar a little higher and encourage those around you to do the same!

Chandra Saurwein holds a B.A. in Intelligence Studies, concentrating on the Middle East and a certificate in Homeland Security from American Military University. She is an Army wife and currently a stay-at-home mother. In the near future she hopes to begin a career in the Intelligence Community or start her master’s–or both.